I had the pleasure of listening to Dr. Deborah Ball speak in person. She is a very fascinating lady and incredibly smart. I think what I liked most about her is her ability to say it like it is in a very understandable way. Here she shows a group of lawmakers that teaching isn't as easy as everyone would like to think it is.

Posted by Ashley at 8:26 AM No comments:

If any of you have seen this particular article...I can say it is completely and totally true for my southern part of the country.

Clarification: The lightest green says "any snow" but also includes merely the prediction of snow.

The local school districts have called off school for the past four days. Here is a picture of my backyard today: 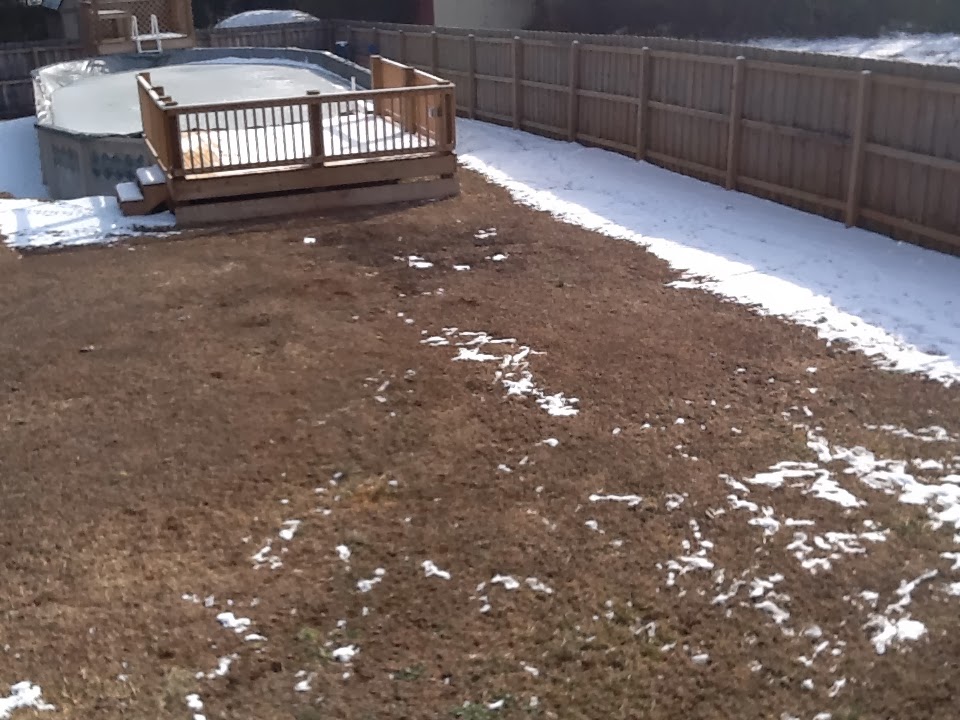 If it wasn't Friday, my money would be on no school tomorrow either.
Posted by Ashley at 8:06 AM No comments:

I am always looking for ways to make boring vocabulary a little less boring. Here's what my intern and I did last week. It turned out better than I expected and so I figured I would share. This took two 45 minute periods.

2.) I then typed up squares with only the vocabulary words in them--one word per square. The students were arranged in pairs and cut out all the words. When they were finished they had 28 individual word cards on their desks.

3.) The students were asked to complete a card sort. They had to take all 28 vocabulary words and put them into categories. They created the categories. They were allowed to use the vocabulary sheets from day #1 to help. I gave them the following guidelines: (a) must have at least three categories (b) at least two words per category (c) must be academic categories

4.) The students worked diligently to arrange their cards. I walked around and questioned/challenged some of their choices. They were made to justify the choices they made. When they were satisfied with their categories they made titles from blank squares. They arranged them neatly on their desks. I came by and took a picture with my iPad. 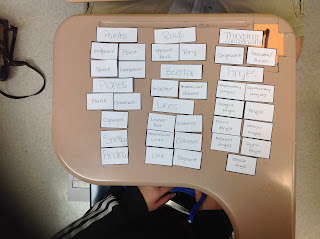 5.) They had to choose one of the categories and write a paragraph using all the words within that category. (This was a good idea but I probably needed better instructions for the students because not all of them produced quality paragraphs.) 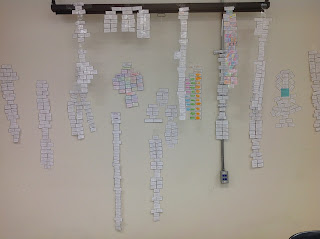 Last semester I left off with graphing lines. By the time the semester was over, *most* of my students “got it”. However, by the time January rolls around most of them forget everything they learned before Christmas. So today I wanted to do an activity that reminded them about first semester but guided them towards second semester.

Of course, they were shocked that I was the only teacher in the entire building that was actually making them do work today. Apparently most teachers decided to spend this day as a free day discussing holiday events….riiiiiiiight. Anyway, my plan consisted of: bell ringer, multiple representations match-up activity, and then graphing practice.

I was pleased with the results from the bellringer. Most of the students could at least answer the first three questions. Quite a few were able to come up with something for the fourth question. We talked about it and then moved on to the activity.

Activity:
My room is arranged into 6 groups of 4 desks each. I cut out 6 word problems with matching equations, tables, and graphs. I attached each separate part to an index card. When I was finished I had 24 index cards with either a table, a graph, an equation, or a word problem. I had the cards all shuffled up and I gave each student an index card. (Some of the students were absent so I had a community pot with the extra cards.)

The word problems were designated a specific group and seat number (each group has seats #1-4).  The rest of the cards had to stand up and then walk around and find the group they belonged to. If they were correct, the word problem, equation, table, and graph would all represent the same information.

After about 10 minutes the groups were happy with their choices. At that time I told seat #1 that they were the reporter for the group. I gave the teams 7 minutes to talk about their choices and come up with a thought out explanation for why each piece belonged to the group. At the end of 7 minutes, I had the reporters from each group stand up and take turns sharing out.
I really loved the share out portion of the activity because I was able to see which groups really understood things like "In the table the y-intercept is represented by...and you find that in the graph by....and the equation shows that...and the word problem says..." It was great!

I'll definitely use this type of group/team work again. The reporting out at the end is what truly made this activity shine...and it got the students talking MATH on day #1!!
Posted by Ashley at 5:53 PM 1 comment:

Desks--ugh. Most classrooms at my high school come equally equipped with them. Perfect for making those nice, straight, make-me-want-to-to-snore rows. I miss my tables. The first school I ever worked at had tables in all the classrooms. Each table was able to seat 4 students. It was so wonderful for student discussion and collaboration. The desks just make me want to cry--or be boring. But I prefer to not be boring if I can help it.

Recently I decided to make the best out of my desk dilemma. I put them in facing pairs and then put two pairs relatively close together. So if I squint my eyes and turn my head sideways then it almost looks like tables. It will do for now. For the most part it accomplishes the same goal.

How do you arrange your desks the facilitate discussion and collaboration?
Posted by Ashley at 6:37 PM 2 comments:

Last Saturday I planned my week out in detail, as usual. It is highly unlikely that my week will go exactly as planned. However, I like having at least a framework for my week early on. It saves me time in the long run. Anyway, that is only partially the point. Yesterday afternoon I was reminded about a short assembly that was set to happen during one of my classes. Well, call me crazy, but I teach the same thing all day long. Yes, that's right. Four times a day I teach the exact same lesson. Soooo, with the assembly taking up only one of the four classes, I had to make a quick decision: go with the plan and get my classes off schedule or improvise!

Enter: Math Vocabulary Taboo! I had heard about this before but I wasn't exactly sure how to play or what to do. So here is how it went in my room. I quickly made 10 sets of index cards (enough for 10 pairs). The index card had the vocabulary word and then three words/phrases that were not allowed to be used a.k.a. the "taboo" phrases. (They also couldn't use the actual vocabulary word or spell or say "starts with" or "rhymes with"...that all made it too easy.) For example:

Slope
I moved the desks into pairs (similar to speed dating). I gave one partner the cards they were the "clue giver" and the other partner was the "detective". For the first two rounds of the game they were allowed to use their vocabulary squares to help. I put four minutes on the timer and let them go. After the timer went off I had the "clue giver" hand the cards to the "detective". The "clue giver" switched partners and then we played another round. After two rounds they had to put their vocabulary squares away and then we played a few rounds without the crutch. I had 10 total vocabulary words and it took the students 3-4 minutes each round. I imagine the more "common" the taboo words are the harder this game is to play. My goal was to take out all the obvious/common words so that they really had to think about the word and its meaning.

It was AWESOME! I'm not even kinda kidding. I loved this activity and I plan to do it again for the next unit. This was higher order thinking if I have ever seen it. The kids were all engaged and having a great time trying to come up with clever ways to describe the words. I had students coming up with sports illustrations, music, kinesthetic...you name it. The kids were so very creative.

I would definitely recommend this to anyone that is struggling with finding interesting ways to talk about and teach content vocabulary.
Posted by Ashley at 5:20 PM 1 comment:

In my last post I included some samples of student work (mini-posters). I decided to make a separate post to highlight the two mini-posters from my ELL students. These two students started out the semester and I was super worried about having them in my class. As best as I could tell, they weren't able to speak any English. I'm glad I was semi-wrong. Some of it was just shyness. They are learning very fast and I am quite proud of their final products for this mini-poster project. 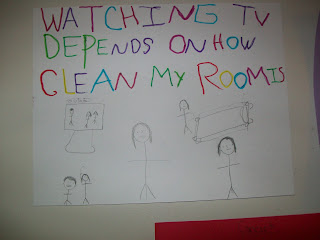 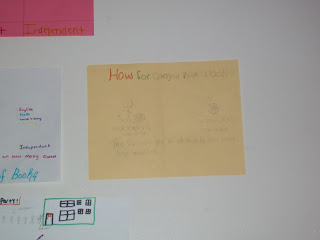